Ran across this cartoon [Link]

this morning. Revolted by the statement that these are the “two coolest jobs”.

Second, I don’t know anyone who thinks being an astronaut is actually cool. I grew up in Huntsville during the hey-day of NASA activity and no one I went to schule with even vaguely wanted to be an astronaut.  Astronauts are only slightly better than monkeys. They basically go along for the ride. Occasionally they get to put on a space suit and float around outside but this in done under control conditions that make Soviet era jet pilots look like hippies. The primary attribute of an astronaut is obedience, what Frederick the great called “corpse loyalty”.

The folks I went to schule with wanted to do adult things that mattered. Lots of us became scientists and physicians and dentists and soldiers and even lawyers. Some of us even worked for NASA but doing constructive things, not ride-along stuff.

So please can the “coolest” stercus.

I ran across an article [Link] this morning on “fan costumes” at the Asian Olympics. I was particularly taken by one, 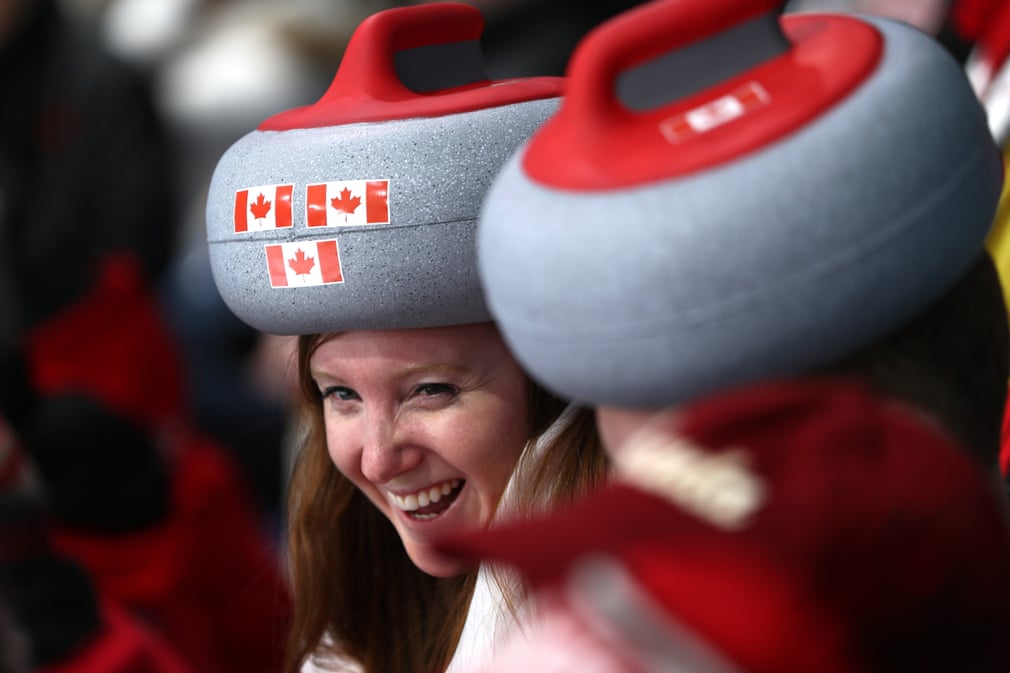 which is a photography of a woman, (note the use of the proper noun form!) presumably Candanian, wearing a hat emulating a Curling Lith

I should mention that I, and a couple of my associates, Magnetic Inductance Force and Dispersion Current Magnetic Field, are members of the Greater Metropolitan Arab Curling Club. As soon as a pond freezes we will have our first practice session. We have been waiting for over ten years. Although one member, Magnetic Inductance Force, has developed a robotic practice device that uses ice cubes for the playing arena. I have trouble with this because I get eye strain rather quickly squinting though the microscope.

And I generally like Candanians. They seem much more like Amerikans were when I was growing up than Amerikans are today. And they seem to still have politicians with integrity.

The whole thing seems the ultimate in useless competition. One pays great sums to participate and accruces no advantage from winning. Although I have been told that some of the more totalitarian nations have executed athletes who did poorly. I suspect what this illustrates is that organizations can be psychotically insecure. Which is not really surprising but they do try so hard to hide this weakness, even from their members.

I will admit that some of the events are superior in some sense to some Amerikan sports, especially the ones that involve motorcars and chewable tobacco. I also have sympathy for the athletes who are basically devoid of any existence other than the Olympics. I suspect they envy people in comas and with mental deficiency. I have even known a couple such and must note that they seem relatively healthy, at least physically. Mentally is another matter.

It occurred to me that we could improve the quality of our politicians if we made Olympic competition a requirement to hold office, at least at the national level.

It also occurs that the periodicity of the Olympics is beneficial in helping us forget its uselessness in the intervals.

Down heah in Alibam, a Political can only get elected – or so the common wisdom is – if a “conservative”.

The question is, what is a conservative. The word is supposed to mean someone who conserves something.

The problem is, that it’s very hard to find what these politicals conserve. It’s pretty easy to see what they don’t conserve:

All that I can see that they actually conserve is their own and their capitalist patrons’ wealth.

So is this like advertising: fundamentally built on prevarication? And why do so many fall for it every time?

Hence endeth the lesson on why 0.9 of humanity are Bogs.

To use the words of Williams Jennings Bryant, the Olympics of a Cross of Gold, a shibboleth, an abomination of the greatest depth, further down than Tartarus.

Yesterday’s Arab Tribune had an article [Link] about how the suggestion of the Legislative Embarrassment (Shame?) of Marshall County, having proposed to arm public schule teachers, has been studiously ignored by the rest of Alibam’s Repulsian Partei.

As he should be.

Two thoughts here. First, the Alibam schule system consistently comes in first in the competition for the nation’s worst schule system, occasionally being bested by Mississippi. Given the antipathy, or perhaps, ineffectiveness, of Alibam public education, do we really want to make it worse by further alienating students and teachers. If we have learned anything from watching the events of the last week, it is that today’s students have some psychological and emotional aversion to firearms and the people who carry them.

Which is probably most of the Repulsians in the state. Even in the legislature. Not that I can blame them. If I had to spend any time in the state legislature, I would want protection, although probably something more effective than a firearm.

As I recall, Chicken Man (aka Neil deGrasse Tyson) said something along the line of “Good students are successful in spite of Bad Teachers.” Let’s not let the politicians turn all teachers into Bad Teachers.

Because frankly, Alibam ain’t got that many good students.

Today is the observation of a holiday called “President’s Day.” As with too much of contemporary government, it is unsatisfying and ill-tasting. Perhaps this is why watching high schule students denouncing the lies and corruption of our elected officials seem so satisfying and gladdening.

Perhaps it is time for a change? Time to rid ourselves of politicians who care more for self and party than country and citizenry?

Perhaps it is time to call for all elected officials to submit letters of resignation that will be accepted once a new system is developed that assures no single interest or organization shall ever stand higher than the good of the nation as a whole.

A sampling seems a good idea, so evilly has the current electoral instrumentality been rotted. Within each district and state and the country, a random selection among qualified (and automatically registered) voters to hold office, perhaps for only a single term in one’s lifetime. We have way more than enough population that no repetition would stifle the sample population and much of the corruption and theft that mars the current governance would be eliminated.

We should assure that terms of office be short, no more than two years for the chief executive and the chief legislators, to minimize corruption and graft. And that lobbyists and such shadow government is forbidden under pain of life internment.

We must assure that the nation and its citizenry are always the prime concern of government.

Kudos to FeDeX! [Link] They just delivered a package on the front porch of Castellum SCP.

No knock. No ring. Just dump.

But the truck radio was playing music so loudly I looked out the window prior to calling police and saw the truck. And checked the porch.

At least they got the address correctly. Which is a rarity.

Now I know why so many packages get stolen: FeDeX.